The 13th of February it was time for the first round of this years D1:10 Dutch national championship. RCdrift Events is running the D1:10 series since this year and they have been working to get new venues. The season immediatly started at one of those new venues. A huge greenhouse company from Made has opened their doors for us to drift in one of their sorting halls. 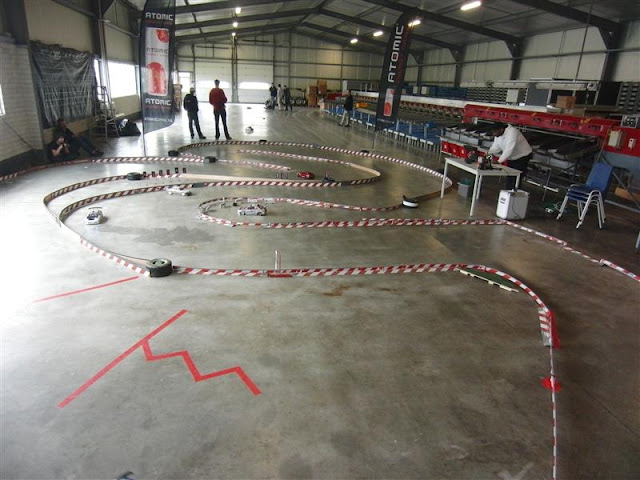 For the first time we were out in full force with all 5 members competing. The team has slowly and silently been changing a bit over last year. Where Rein has somewhat quit the hobby we now have Edo joining us officialy since this year. It was nice to finally have a big event again as the winter stop was hard on us all.

With 36 contestants this was the biggest turnout ever at the D1:10. It meant it would be hard to score well as there was a lot of serious competition. The track wasn’t helping either, it was very slippery due to dust getting stuck in the tires. Fortunatly we all did very well with especially Dennis going far beyond everyones expectations.

First up was Reinier, who had to battle against Ricardo Smits (not our Ricardo) and lost. Ricardo S was on fire and progressed from the D poule all the way to the C poule semi finals. It always sucks to lose, but knowing you lost from one of the best softens the feeling a bit.

Reinier also got nominated for the concours. Even though he didn’t win it, its still a big honour.

Next up were me and Ricardo, who had to go against each other in our first battle. Something that has happened many times before and always gives some mixed feelings. Battling against each other is always fun as we know each others driving style and lines so we can drive very close, though it sucks aswell as it means one of us will be knocked out immediatly. We rather meet up in the finals after we both win a lot of battles. Some day maybe..

I went in the battle without much confidence. I had forgotten my glasses and didn’t have much tracktime as I was helping others with their setup. The first round with me leading went very well scoring a 5-5. Second round with me chasing didn’t go that well. Ricardo had a lot more speed then I did so I really had to push it to keep up. Coming out of the second corner my car slided out way to wide and hit the boarding handing the win to Ricardo with a 10-0.

Ricardo then went up against Ronny. Ronny, being just 13 years old, has been surprising everyone with his talent lately. After the two battle runs it was too close to call so they had to go again. In the first run Ricardo spun out, handing all 10 points to Ronny. On the second run all Ricardo could hope for was for Ronny to spin out too, which didn’t happen. Ricardo won the run, but the points weren’t enough to beat the 0-10 of the first run.

On the other side of the knockout chart for the B poule was Dennis who had to go up against the winner of poule C. Lennaert had won all the battles in the C poule and didn’t plan on going easy on Dennis. With much more speed and experience Lennaert beat Dennis ending Dennis’ day early.

Moving on to the A poule, or what you could call the final 8, we find Edo who had an easy game with his high qualifying score. In his first battle he had to go up against Team Atomic’s Arno. Arno has always been a very quick driver and would surely give some competition to Edo. Edo managed to keep his cool and also keep up with Arno’s speed which resulted in a win for Edo. This means he was in the top 4 of the day and in the semi-finals.

In the semi-finals Joost proved to be a too strong opponent for Edo, but Edo wasn’t finished yet. In the battle for 3th and 4th place he was up against Jim, who has a very similar driving style. After what probably was one of the fastest battles of the day Jim came out as the winner and took 3th spot. Edo ended up on 4th place which is still amazing!

I am really looking forward to the next D1:10 round, which probably will be in the last weekend of May at HFCC in The Hague. In the meantime TWS will be at the AutoRAI next two weeks and other shows.

Pictures are courtesy of our friends at DoriGazo.nl. Check out their website for more pictures of this D1:10 round and more.